Climbing a ladder up the side of a two-story house, no sweat. Looking down from the roof of a five-story building, no problem. 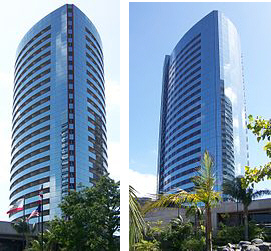 Going over the edge of the 25-story San Diego Marriott Marquis and Marina towers, no way!

Until I joined the company that cleaned those two imposing buildings, most of my work involved cleaning windows of small office buildings, storefronts and houses. If I wanted to keep my new job, I’d have to conquer the stark terror of peering down 360 feet.

I didn’t have time for therapy. So I just did it. I slipped into my harness, clipped onto the safety line, and climbed onto the stage — the platform that goes up and down the side of the building to access the windows.

My coworkers pushed the levers and we began our descent to the first row of glass. We cleaned the glass row by row until we reached the bottom, where I breathed a huge sigh of relief. I made it through my first drop! From that point, it became easier each time. A few months later, I was dropping over the edge in a bosun chair, with zero fear.

A higher fear to conquer

Fast-forward to a couple of months ago. For years I’ve wanted to do a tandem skydive. Even though it was on my Bucket List, I thought I’d never really do it. But my wife surprised me with a LivingSocial voucher for a jump at Phoenix Area Skydiving. Uh oh. Now I had to do it.

Because of multiple reschedulings due to weather and other issues, the jump day was postponed for seven months. With each delay, my resolve weakened. When the jump day arrived, I felt nervous, but I pushed the butterflies aside and drove down to Casa Grande. Thankfully I was in the first group to go, so I didn’t have much to time to let the butterflies grow. After mere seconds of instruction, up and away we flew. At 10,000 feet it was time to jump. To say I was scared is an understatement.

We had 40 seconds of free-fall, including three flips, which felt crazy. Then the chute opened and we began the blissful journey back to earth — until the very end. As my jump instructor said, we came in haulin’ ass.

It was an experience I’ll never forget. I can’t wait to do it again!

Posted in Fear of heights

If your area is not listed, call to inquire!

“Windows look amazing! Thanks so much!” –Kathleen C.

“Wow! I don’t think my windows have ever been this clean! This is fantastic!” –Julie B.

“What a great job Jon did, and the screens have never been this clean! The windows make me feel like that just-bathed feeling!” –Francis S.

“When I called he was booked… but I needed windows cleaned for pictures to sell my house. Jon rechecked his schedule and found an opening and came out on Saturday to do the job. This guy is good so book him early. I’ve never seen my windows and screens so clean. Thank you Jon.” (Michael Caba, Angie’s List)